Warning: count(): Parameter must be an array or an object that implements Countable in /home/customer/www/rachelhamiltonimprov.com/public_html/wp-content/themes/virtue/lib/cmb/init.php on line 714
 My Ass-Kicking Great Grandmother | Rachel Hamilton Improv
Skip to Main Content 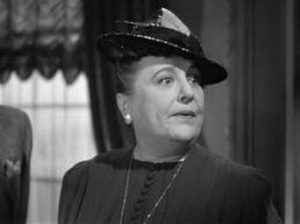 This is my great-grandmother.

Her name was Florence Bates.

She was an astonishingly courageous human being.

Born in 1888, Florence became one of the first woman lawyers in Texas in 1912.
That would be a full eight years before women could even vote.

In 1912, she got a divorce.  Back then, that made her a straight-up renegade.

She began an acting career at age 50 and proceeded to appear in over 65 movies.

Clearly, this was a woman who lived big and took risks her whole life.

Having been a lawyer in Texas and then an antiques dealer in Mexico, she and her second husband, (who was by all reports the love of her life), moved to Los Angeles where they opened a bakery.  All that and she could bake too.  Damn.

As the Hollywood story goes, once in Los Angeles,  Florence did her neighbor the favor of driving her to an audition at The Pasadena Playhouse.  Florence had no intention of auditioning herself but apparently the director saw her in the audience and requested that she audition as well.

And, we all know where this is going.. Florence ended up getting the part.

For all the Fame lovers out there, Florence was the Leroy of her time.
I invite you to enjoy the quintessential audition-stealing scene.

I don’t know who this actress is, or if she ever worked again, but this scene has secured her a position on the list of the Greatest Protagonists of All Time.

I imagine Florence’s version of inadvertently robbing her friend of her desired role was not quite as brutal.  And involved less pelvic thrusting.  But who knows, she was renegade.Anyway, where was I…Ah yes.  Florence was cast in a play at the Pasadena Playhouse during which she was scouted for the movies.  Her first film was Hitchcock’s Rebecca in which she played the first of many unapologetically horrible snobs, a type she played again and again.As luck would have it,  Florence’s very first film won the Academy award for Best Picture..  How pissed was that neighbor after that, I wonder..

From all that I’ve heard from those who knew her, Florence was nothing like the characters she played in the movies.   To the contrary, she was  warm, kind and bohemian as all get out.

Florence Bates died in 1954, long before I was born.  I never got to meet her in person and yet I feel very connected to her.Maybe it’s because I find her wildly inspiring.Or because I so I admire her giant Texas-sized balls.  She was not limited by what the culture in which she was living gave her permission to do or to be.  I love that.

And what’s even more extraordinary than her capacity to tolerate the disapproval of the dominant culture in which she lived is the fact that she was able to bypass the Biggest, Toughest, Most Naysaying Gatekeeper of All… Herself.

The cultural restraints we encounter are nothing compared to the restrictions we put on ourselves.

I can’t be loud.
I can’t look foolish.
I can’t risk insulting someone.
I can’t let disappoint my mother/spouse/community/the Baby Jesus.
I have to stay in this career.
I have to make this amount of money.
I have to be sunny and upbeat.
I have to be cynical and cold.
I don’t have the hips for origami.
And on and on and on…

Until you set so many  limitations around who you are allowed to be,  you scrunch yourself into woefully abbreviated versions of your humanity, occupying less and less of your whole, intricate, multi-faceted, extraordinary selves.

And I really really want us all to stop doing that.

We all agree to unscrunch ourselves.

As an Improv teacher,  I get to help people re-inhabit those restricted territories inside of themselves so that they may put all of their full aliveness out into the world.

The world needs your full aliveness!

May we all take a page out of my ass-kicking great grandmother’s book by:

Continuing to fight the good fight against your perceived limitations!

Summoning up the courage to do your thing, even if it’s unusual or out of bounds!

Taking the risk to drop what no longer serves you and continually be
creating the life of your dreams!